Home/Blog/Benefits of Having a License to Carry (LTC)

Benefits of Having a License to Carry (LTC)

The Firearm Carry Act of 2021, commonly called “Constitutional Carry” but more accurately defined as “Permit-less Carry” will go into effect on September 1, 2021. Many are asking if they should pursue getting a License To Carry (LTC).

The answer is a definite YES!

Want to get your Texas License to Carry (LTC)?

You have the option of taking the class in person OR you can complete the classroom portion online and then schedule time with a LTC instructor to provide the range qualification. All the details are outlined on our License to Carry Information page.

We hope to see you an one of our upcoming classes!

Victoria has been a part of the management of Shady Oaks Gun Range since the opening in April 2014. She is an NRA Range Safety Officer (2014), NRA Pistol Instructor (2017), Texas License to Carry - LTC Instructor (2018), and NRA Refuse to Be a Victim Instructor (2021). Currently, Victoria focuses on teaching Basic Pistol classes and LTC Classes as well as some behind-the-scenes administrative duties. 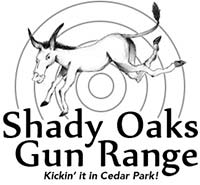